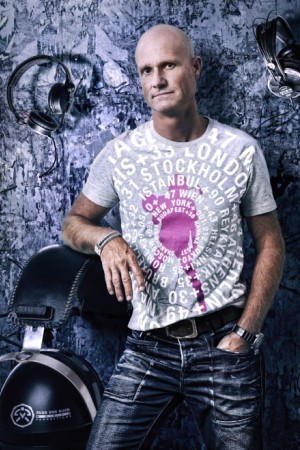 Ruud was born in Baarle Hertog, Belgium 18-01-1964, but only lived there for just one month. His parents where Dutch and decided to move and take the whole family back to Holland, where he spent his whole school time. As a young kid he used to play with hammers and nails all day, trying to create all sorts of things and funny figures and so his parents weren’t surprised when he told them that he wanted to be a carpenter. He was 14 years old then. Later he started studying in that direction and after he took his degree, he started working for several companies as a carpenter and wood-manufacturer.

It didn’t take him long to realize that this job wouldn’t give him the fulfillment he had planned in his life.

It was during work when he heard a 2 hour non-stop mix of dance music on the radio. The mix was made by the most popular D.J./mixer at that time, Ben Liebrand. Ruud was instantly aware of it: THIS IS IT!!!!!!

The first thing he did the next day was buying 2 turntables (without pitch-controls!!) and spent all his spare time on mixing. Self-confident as he was, he recorded his mixes on cassette-tapes and offered them to the local clubs…and they loved his mixes! He kept on developing his mixing-skills and by delivering newspapers, he was able to make small investments in equipment. Not long after this he participated in a mix-contest, for the first time, and amazed himself by winning!

After this victory many important mix- and DJ-contests and victories followed (local and national championships). At one of the contests he won, his big idol, Ben Liebrand, was member of the jury. Right after the contest Ben Liebrand walked up to Ruud and told him that he was astonished by Ruud’s skills and talent. “A memorable moment…”

From here on he started working in a more professional way and started DJ-ing in several clubs, making mixes for the most popular radio programs of nationally broadcasting stations. Because of all this work, he got well-known in the scene and he earned enough money to start a small recording studio. He was always working with records from other people, so he got very curious if he could produce one of his own. So he produced an instrumental track and added a few vocal pieces from other records (samples) to it and his first record was born: “Drivin Force – Rock this world”

He amazed himself and his friends and family again by pumping this dance-track into the top 10 of the National Dance-charts! This was his definite start sign!!!

He was convinced that with originally recorded vocals (singing and rapping) his records would be perfect to cross-over to radio and finally to the national play- and sales charts. He created an act called “Twenty 4 Seven”, produced I can’t stand it, and before he realized it, all his records even crossed all borders of the world!!!!

For more information about Twenty 4 Seven, Check out Twenty4SevenNL on Facebook (this is the only official page of Twenty 4 Seven). After two years of thinking what to do in the future, Ruud decided to start up his own company.

At the moment Ruud is still working as a DJ and is still making music. Check out the site often for more information about latest releases etc.